JC SPED was the name I gave to a series of lo fi 4-track tape recordings I made in the 1990s that used Casio keyboards and tape speed manipulation as the primary sonic signature. Some of these songs have now been re-recorded, along with a few new ones and they have just been released to iTunes, CD Baby, Spotify, and lots of other digital distributors.

In order to have the all caps casing approved by the digital distributors, i was also required to ‘reveal’ what JC SPED stands for. The acronym JC SPED unpacked means Jason Camlot: Sound Processed with Extensive Depression. Have a listen, and have fun.

Read more about it at CD Baby

Or iTunes
All proceeds acquired from from sales will go towards recording the next JC SPED album.

My new book of poems is out with Mansfield Press. 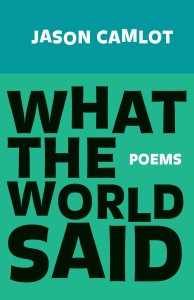 Check out the recent redesign of the spokenweb home site, and follow developments in the project at spokenweb.ca

GeekDad has posted a very nice entry about Victoriantor, as has Annabelle.

JC is pleased to report that the LudicVoice team has shipped our new iPhone game, The Victorianator.  Pleased and surprised, as well, to see that we have been receiving some timely notice in eminent publications, like The New Yorker.